Jude’s letter is addressed to the BELOVED. Not to unbelievers.

1 Jude, a servant of Jesus Christ and brother of James, To those who are called, beloved in God the Father and kept for Jesus Christ:

He has written because there is a problem among the true believers of God. Some have strayed from truth. There are three different errors that are exposed.

Woe to them! For they walk in the way of Cain, and abandon themselves for the sake of gain to Balaam’s error, and perish in Korah’s rebellion. Jude 1:11

Now we must figure out from the Old Testament just what these three men represent.

The Way of Cain

The way of Cain is that which seeks to kill truth. He thought to gain a worldly advantage. Having failed at that he killed what he viewed as his competition. He thought little of his own soul or of God’s future world. The next life meant nothing to him. He is the ultimate of rebellion as represented in the Word. Cain was the first atheist.

. . . and not be like Cain who was of the evil one and murdered his brother. And why did he murder him? Because his own deeds were evil and his brother’s righteous. 1John 3:12

Balaam and the Ass is a 1626 painting by Rembrandt

Balaams error is one of greed. For gain, Balaam taught the Moabites to corrupt Israel’s faith.

But I have a few things against you: you have some there who hold the teaching of Balaam, who taught Balak to put a stumbling block before the sons of Israel, that they might eat food sacrificed to idols and practice immorality. Rev. 2:14

When we consider church history we see that all the corruption in dogma and doctrine were at their root done for gain. He who has the biggest congregation gets paid the most. So give the people what they want. Don’t confront sin or error. That would bring in less people and therefore less money.

The Punishment of Korah and the Stoning of Moses and Aaron. Fresco by Sandro Botticelli in the Sistine Chapel

Numbers 16 is where we find the tale of Korah’s rebellion. Korah thought that he was just as good as Moses and Aaron. Korah claimed that all were holy, or set apart for God.

. . . and they assembled themselves together against Moses and against Aaron, and said to them, “You have gone too far! For all the congregation are holy, every one of them, and the LORD is among them; why then do you exalt yourselves above the assembly of the LORD?” Num. 16:3

This is where the inherited churches have brought us. They are at odds with Moses. It is as if Moses and Aaron worshiped another god. As Korah they think that they are just as good, if not better than some Jew thousands of years ago.

Because Jesus/Yeshua is much more worthy than Moses, the church has decided that they do not need Moses at all.

12 These are blemishes on your love feasts, as they boldly carouse together, looking after themselves; waterless clouds, carried along by winds; fruitless trees in late autumn, twice dead, uprooted; 13 wild waves of the sea, casting up the foam of their own shame; wandering stars for whom the nether gloom of darkness has been reserved for ever.

Christianity was never suppose to throw the law away. They were suppose to improve it by spiritualizing the sacrifice. They would then be able to leave in environs of Jerusalem and GO into the whole world.

Do we then overthrow the law by this faith? By no means! On the contrary, we uphold the law. Rom. 3:31 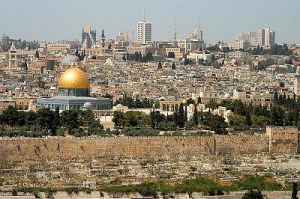 We are often asked by people if we have been to the Holy Land, Jerusalem, or Israel. As if this were some kind of proper goal. Some kind of pilgrimage which must be accomplished in ones life time.

FYI: Dispensationalist teach that a literal physical kingdom has been delayed or  is yet future and therefore Israel must again rebuild the temple and resume sacrifices.

Just in case some haven’t noticed God abandoned that place and the rituals that were in it, for a more spiritual habitation, our souls. We no longer have need of a religion of form and custom. Ours is a religion of faith and action. We no longer look to physical manifestations, we walk in a mystical sacred devotion of our convictions.

Do you not know that your body is a temple of the Holy Spirit within you, which you have from God? You are not your own; 1Cor. 6:19

John Bunyan was right when he wrote his great Pilgrim’s Progress, ours is a spiritual walk or halakh. It is fraught with pit falls and false trails that we must avoid, or not having avoided them, make our way back to the right and true path that leads to the Jerusalem from above. END_OF_DOCUMENT_TOKEN_TO_BE_REPLACED

13 Go and learn what this means, ‘I desire mercy, and not sacrifice.’ For I came not to call the righteous, but sinners.” 14 Then the disciples of John came to him, saying, “Why do we and the Pharisees fast, but your disciples do not fast?” 15 And Jesus said to them, “Can the wedding guests mourn as long as the bridegroom is with them? The days will come, when the bridegroom is taken away from them, and then they will fast.  16 And no one puts a piece of unshrunk cloth on an old garment, for the patch tears away from the garment, and a worse tear is made.  17 Neither is new wine put into old wineskins; if it is, the skins burst, and the wine is spilled, and the skins are destroyed; but new wine is put into fresh wineskins, and so both are preserved.” Matt. 9:13-17

Every time we’ve ever heard this one preached it is about whether or not we should fast. However that is not the lesson the Messiah teaches here.

It is about mercy and not sacrifice. It is about patching with a new cloth and putting new wine in old wine skins.  Both of which will make a hole or tear the garment or drain out the wine.